September 27, 2015
I drive a 2006 Subaru WRX. I used to drive a 2002 WRX (do you sense a pattern?). I've parked in some pretty sketchy places in both cars over the years, even spots with freshly broken glass from the poor soul who parked there before me. Neither car has ever been broken into; knock on wood. Both cars were/are heavily tinted.

Theory: having your windows tinted may help prevent break-ins because people can't see your stuff, but I think there's something bigger going on. If you're a thief and you break into someone's car with tinted windows there's a chance that person might hunt you down and kill you. Because what do most people associate with highly tinted vehicles? Drug dealers. Not likely, but probably an order of magnitude more likely than non-tinted cars. So why risk it?

I am not a drug dealer and doubt even this risk can overcome the fact that it's still a Subaru, but still, I like to think it helps. 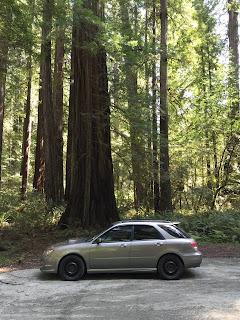