Showing posts from 2011
Show all

Cry Me a River 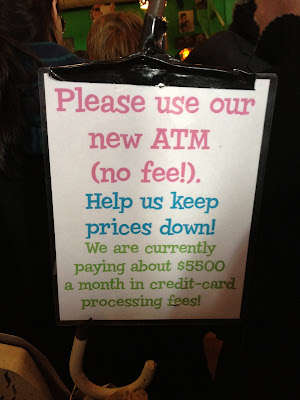 I went to the Friendly Toast for brunch yesterday and saw the sign pictured below while we were waiting for our table. It probably shouldn't have gotten me heated, but if it didn't this blog would exist. Just suck it up and accept the fact that no one wants to carry cash anymore. If you're paying 2% per transaction at the high end, that means you're grossing 275 grand a month. And you're really gonna have to raise prices for THAT reason? You expect people to go out of their ways to save you a few bucks when you're making 275k A MONTH? Why stop there? I have an even better way to keep prices low: dump the wait staff. Leave index cards on the table, I'll write down our orders, and then swing by the kitchen every few minutes to see if they're ready. In fact, why not just leave the ingredients in the back and I'll cook the shit too.
Post a Comment
Read more

June 19, 2011
It's 1-2 o'clock in the morning and you're nearing the end of a long road trip. The Cumberland Farms coffee buzz is wearing off and your Chex Mix is damn near gone. You pull up to an intersection right as the light is fading from yellow to red. Great. What happens before the other light even gets a chance to turn green? An all-way-walk signal. Awesome. You look left and right, front and back, even up and down, but there isn't a pedestrian in sight. So who the hell pressed the button?
Post a Comment
Read more 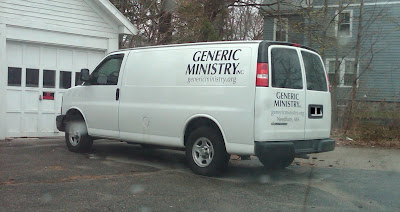 Beliefs about religion are usually some of the strongest people hold. Just look at the controversy Stephen Hawking stirred up with his recent denouncement of heaven . As such, I found it very surprising to see this truck in a Needham driveway. Could they be any less decisive? If you don't have your religious convictions, what do you have?
Post a Comment
Read more

April 20, 2011
As anyone who's reading this knows, I love watching basketball (almost as much as playing it). TNT carries a lot of NBA games, including two every Thursday night, with the presenting sponsor often being the Marines. This raises a few questions for me, most notably: what the hell are the Marines doing sponsoring anything? It strikes me as a strange use of defense funds compared to...I don't know...guns?! Don't get me wrong, I understand how they could benefit - think people who watch basketball are the target market, viewers see sponsorship and sign up, more people enlisted - but that still doesn't offset the cost. Sports advertising is expensive, and since the Marines certainly aren't a profit center, it's not like each new enlistee generates additional income. In fact, doesn't a bigger Marine Corps cost more money to support? Essentially they're spending money to allow themselves to spend more money. Now that's the kind of organization I wanna do b
Post a Comment
Read more

March 20, 2011
I try to keep my blog from being overly car-centric in hopes of appealing to a wider audience, but this is one that I can't get over. You know when you're in a rush to get somewhere, perhaps driving a few mph over the speed limit, and you pull up behind a BMW 335 at a stoplight? First thing that goes through your mind is, "Great, this guy's gonna be flyin'." Light turns green...waiting...and instead of a bat outta hell, it's like a pig into molasses. Now contemporary automotive theory dictates that car companies should have multiple tiers for each available model. The distinctions are usually a combination of power and aesthetics, with the former accounting for most of the difference in price. This is good for people like me who have mad whip, because it allows us to choose a model that'll make it easier to get points on our licenses. The problem arises with people who drive like my grandmother (RIP) but are still under the illusion that they need abso
1 comment
Read more

February 13, 2011
When launching a new search website and attempting to gain ground in a market already dominated by a single player, it would be silly to, you know, actually develop a new search engine. A much more cost-effective solution would be to steal results from the popular, established source. Kinda like what Bing what Bing has been doing with Google . And by kinda, I mean exactly.
Post a Comment
Read more

January 20, 2011
I just saw a commercial for the 2011 Dispatch Summer Tour at TD Bank Garden on June 25th . I went to the LAST Dispatch concert. I HAVE WITNESSES! This gets me heated.
Post a Comment
Read more
More posts