Showing posts from January, 2010
Show all

Think Before You Act

January 27, 2010
This has finally happened enough times to get me sufficiently heated for a blog post. That's a pretty low bar, I know, but today gave me the inspiration I needed. Two radio stations that sometimes get run in my car are JAM'N 94.5 and KISS 108 (which is actually 107.9, which also gets me heated, but is not the point right now). Nowadays I'm usually tuned in to NPR, but taking a break from the financial crisis and the dubious wars in various Middle Eastern countries that most people couldn't place on a map can be necessary. JAM'N used to be my favorite, but it's degraded over the past decade. KISS used to suck, but has undergone moderate improvement. The reason for this convergence? They're both owned by Clear Channel now. Their playlists are disturbingly similar, covering much of the same pop music. JAM'N leans slightly to the hip hop side, while KISS leans to the "I'm a 12 year old girl" side. An hour spent switching back and forth will
Post a Comment
Read more

New Word For Your Noggin

January 12, 2010
Welcome to my newest segment: New Word For Your Noggin. Your number one source for slang, bad puns, and vernacular from the not-so-mean streets of Cambridge. These are words I either made up, stole from someone else and am claiming as my own, or simply want to pass along for the greater good. Today's entry: textastrophe tex•tas•tro•phe - noun 1. A catastrophic text message-related event. 2. A grossly misinterpreted text message. Examples Sending that text about what she was gonna do to her boyfriend, to her dad, turned into a serious textastrophe. The most prominent textastrophe to date was the result of Tiger Woods texting his hos in different area codes. Using the word "fat" in a message is a textastrophe waiting to happen, even if you mean it in a good way. Remember, you heard it here first.
Post a Comment
Read more 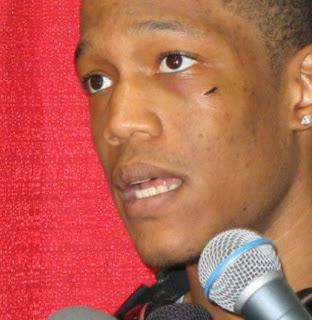 For Christmas ESPN and ABC got me five NBA games back-to-back-to-back-to-back-to-back. I didn't even have to ask, they just knew. Besides just being awesome, it was a great opportunity to play one of my new favorite games: Emotional NBA. The game is a close cousin to Celebrity NBA, which I'm sure is still fresh in your mind from April . Have you ever known someone who looked like they were constantly immersed in a deep pool of sorrow? If so, you already know how to play. Anyone can be the focal point (friends, co-workers), but for some reason it's hard to find many pictures of my boys on Google. With NBA players, the examples are everywhere. Below you'll find the name, team, picture, and whatever's going through his head. Let's start with the classic: Anthony Randolph (Golden State Warriors) "Why's everybody in the NBA gotta be so mean?" *sniffle sniffle* Kendrick Perkins (Celtics) "I'm 'bout to kill a mothafucka." Andrei
Post a Comment
Read more
More posts