Showing posts from June, 2009
Show all

Get the Guy a Caddy 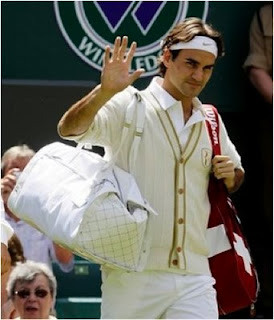 It's going to come as a surprise, but this post isn't about Federer's sweater. I saw some Wimbledon highlights on SportsCenter last weekend and was surprised by the amount of luggage he carries to and from matches. The fact that it looks like the bag over his right shoulder should be filled with diapers notwithstanding, he appears to be slightly overpacked. I don't claim to be much of a tennis player, but have a pretty good grasp of the game. Here are the things I do know about professional tennis: balls are provided, the most racquets broken during a match is 2 (I just made that up, but you would have believed it), and adolescents who ambulate around the court like robots handle the towel service. Which begs the question: what's in those bags? You could fit 3 racquets, an extra change of clothes, and at least a dozen assorted headbands in a paper bag from Trader Joe's, and still have room to spare. Instead, Federer looks like he's prepared for an e
Post a Comment
Read more

It was a given that Akon would eventually get a shout-out for my Favorite Girly Hip Hop Song of the Moment. I figure it's best to get this over with now before he throws another fan off the stage or gets his swerve on during a show again. Unlike with Next 2 Ya (Don't Hate April 4, 2019), I can't even make the excuse that the artist is wicked hot. At least he sounds like a chick: Akon - Be With You The foil to this lovefest is a Lil' Wayne song that Shizz put me on to last weekend. I've mostly been exposed to his mainstream hits via the radio, but I'm starting to learn that those are only scratching the surface. In fact, most of his music that's played on the radio sucks compared to what's hiding underground. So here's a lil' taste (pun definitely intended): Lil' Wayne - I'm Me And since I know you're wondering, this is what he says in the middle of the first verse: I know one day they gotta bury him Better lock my casket
Post a Comment
Read more

June 21, 2009
As anyone who's texted or IMed with me knows, I don't cut a lot of corners. Proper punctuation, grammar, and spelling are my game. I don't know why other people find it such a burden. Believe it or not, that extra button to add a period and extra two keys to spell out "you" really don't impede my ability to send messages. So how does an abbreviation like "bff" gain widespread acceptance? I can count on 0 hands the number of times I've said "best friend forever" in conversation. I promised to be John's best friend in 1st grade if he traded me his Doritos, but we didn't have cell phones back then. Someone must have been sitting at their computer one day and had an epiphany: This is the sixteenth time I've typed best friend forever in the last three sentences, and it's really starting to slow me down. There's gotta be a better way. That's it! Bff! I'll be the Usain Bolt of IMing. And what did that person do with
3 comments
Read more

June 20, 2009
I'll come right out and admit it, Jawann is not the easiest name to figure out. If you've never seen it before, it's hard to pronounce. If you've never heard it before, it's hard to spell. I've learned to live with that, and most people at least make an attempt. Still, I will never understand how my Human Resources professor in college who holds degrees from institutions of higher learning and whose central purpose is to educate students on working with their peers regardless of demographic factors could possibly butcher my name into "Joanne." But I digress. I got an e-mail on Thursday for "J. Winslow," from someone whom I've known for months. What is this, an episode of Family Matters ? I know my first name is a little deceptive, but even that wouldn't help me pass for a Winslow . Anyway, how the hell do people struggle with Swislow? Sure, it's tempting to throw an extra S in the middle. That's understandable. But Winslow? Fi
1 comment
Read more