August 18, 2009
I know you all want to say heighth because of width and length, but that doesn't come close to qualifying as legitimate justification.

1. You sound like you have a lisp when you pronounce it like that.
2. The word has enough Hs in it already, can't you just leave well enough alone.
3. By that logic you should say weighth and tangine too.

I expect anyone who still says heighth to spend a lot of time at Ye Olde Candy Shoppe and commute on a bike like this: 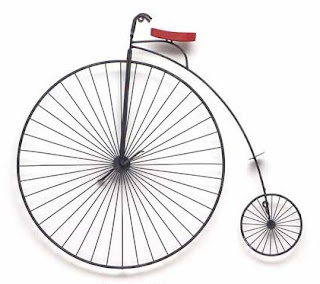 Note: I try to keep the nerdiness to a minimum, but it snuck out in the latter part of number 3. If you need a hint, think right triangle.
#getsmeheated