September 16, 2009
Just because something comes with a lanyard doesn't mean you have to look like a dummy by actually wearing it. Maybe the name "jump drive" is a little misleading for some people. I promise, even in a pocket, your data ain't goin' anywhere.

More recently I noticed this phenomenon at the JCC (that's Jewish Community Center, as if you didn't know). Granted most members are taking full advantage of the social security that I'm paying for and still have vivid memories of the Eisenhower days, but I don't believe that even they'll lose the access card between their deathmobile and the front door.

Then of course there's the school ID and keys combination, which unfortunately pervades most college campuses. If having those two things hanging from a lanyard is the only possible way to keep track of them, then A) learn to hold your liquor and B) you probably shouldn't have been admitted in the first place.

Point is, there are very few things that need to be hanging from your neck...and a clock is definitely one of them: 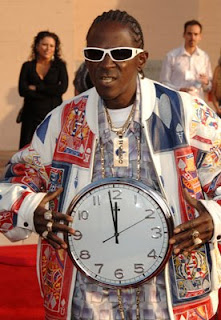